UK soldiers round up hundreds on a flight to free themselves from Afghanistan, while thousands remain at the mercy of the Taliban.

Some 265 British and Afghan nationals crowded aboard the RAF C-17 transport plane that took off from the chaos of Kabul on Saturday evening for RAF Brize Norton.

One of the lucky few was Uber driver Helmand Khan, who had spent three days desperately trying to get the Taliban to safety.

It came as ISIS jihadists threatened to attack Kabul airport and the death toll on the ground rose to at least 20, including seven on Saturday.

Many victims were crushed in shoves as the Taliban fired in the air to clear the crowds. The Defense Ministry said tonight that 5,725 British and Afghan nationals had been evacuated since the rescue mission began on August 13.

Among them were 3,100 Afghans, including interpreters who assisted the British forces, others eligible for the Afghan Relocation and Assistance Policy program, embassy staff and nationals of partner countries.

About 1,000 had been airlifted in the previous 14 hours, the Defense Ministry said, with the rescue mission “picking up speed.” One of those who made it through Saturday’s RAF flight, Mr Khan, from west London, sat with his arms folded with his children by his side.

Mr Khan, who was visiting relatives, was seen cramming his UK passport into television crews as he attempted to enter a compound where the UK embassy is housing evacuees.

Desperate, Mr Khan told the BBC: ‘You’ve seen British passport, these are my children! I came in the morning, five o’clock, but I’m still waiting. For the past three days, I have been trying to get inside.

Read our Afghanistan Live Blog for the latest updates

Watching the huge RAF plane take off, five young women sobbed at the edge of the runway as they waited for their flight.

Behind them, tracer shells from heavy machine guns lit the skies of a city in which they had dreamed of living successful and happy lives.

They were among the lucky ones who had survived the fatal crashes and melees at the perimeter of the airport.

They had avoided the beatings of the Taliban guards and had been called back and taken to the airport.

But their tears were not of joy or relief, but of sorrow. Farahnosh, 22, a medical student in Kabul, said: “I’m leaving everything. My life is in Kabul. My family is in Kabul. I am a student and I love to study.

In the queue for an evacuation flight to Qatar were 16-year-old Mahida Foku and her family. She said: “We leave our hopes and memories here. We don’t know what to expect.

Journalist Bilal Sarwary, who was on the same flight, said: “What you see here is a brain drain. It’s the crème de la crème that has to go.

As the situation worsened, military planes began performing combat dive landings at the airport for fear of an attack. The planes also used flares designed to confuse homing missiles.

What you are seeing here is a brain drain. It’s the crème de la crème that has to go.

Britain’s Ambassador to Afghanistan Sir Laurie Bristow tweeted from the Evacuation Management Center that “the huge effort” to get people out to safety “was accelerating”.

He said: “Our soldiers, diplomats and all forces have worked tirelessly to bring our British nationals, our Afghan colleagues and the embassy staff to safety. There is still a lot of work to be done. “

It emerged yesterday that a mother and three children, two aged five and nine, from Notts had been repatriated by military plane.

The mother was caring for sick relatives when Kabul fell. Although they had correct documents, they said, the Taliban had prevented them from leaving.

This happened as soldiers continued to tear children away to safety at the airport. One photo showed U.S. Army Sgt. Breanna Jessop caring for an unaccompanied infant waiting to be reunited with his parents. 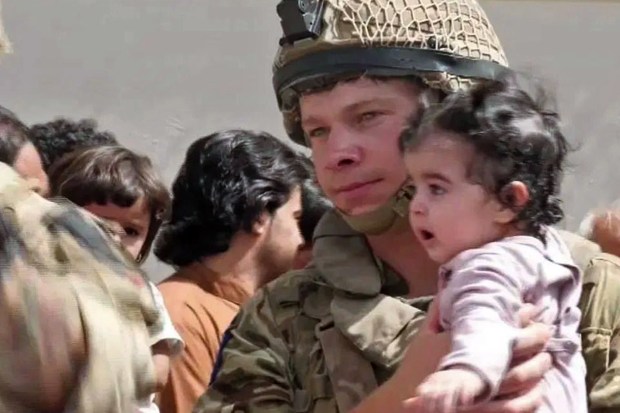 THE British soldier pictured holding a baby passed over a barbed wire fence insists he was just doing his job.

The image of the corporal of the parachute regiment at Kabul airport has gone viral. He was holding the baby so his mother could pass too.

The anonymous squad told Sky News: “It just sums up what guys do on a daily basis, not just me, everyone. First came the baby, then the mom. The baby was grieved, [but] calmed down a bit – maybe I’m a natural!

His commander said he was proud of him.

Afghanistan: the desperate race to escape

UK weather – Britain will experience the ...

Prince William’s grief as he broke up ...